You are here: Home/ Blog / How to Detect if an Email is Monitored by Someone Other Than Recipient

The Face of Big Brother Changes, as do Wire Taps

Back in the day, with Edward Snowden’s revelations about the NSA recording all our digital communications, it became apparent that George Orwell’s 1984 image of Big Brother was made manifest: Big Government.

Over time, we all accepted it – the government knows and sees all. Then we realized that, for most of us, government tracking was passive. Sure it’s a monster if awakened, and you could possibly become a target of whatever, but it shouldn’t impact daily life for most of us.

However, Big Brother evolved with its new face being (very) big tech: Meta (Facebook), Alphabet (Google), Apple, Microsoft, and Amazon in addition to the mobile phone companies connecting your smartphone. Beneath the facade of an overly optimistic and hyper-connected world, the actual world we live in resembles more a Foucauldian Panopticon. Somehow the notion that it’s OUR lives being surveilled rarely reaches our consciousness.

Those who are aware soon began to understand the tradeoff between convenience (and free) in exchange for our digital footprints, likes, and passions. For most people, even knowing that Google records every keystroke typed into the Gmail interface while associating that data (and those insights about you) with YOU while Alexa listens to our conversations even when not called upon, trying to glean information on future products we might be interested in, the convenience of these techy tools has generally outweighed concern for personal privacy. And who knows, maybe you’ll get a coupon emailed to you for something in your subconscious that you did not yet know you wanted 😊! 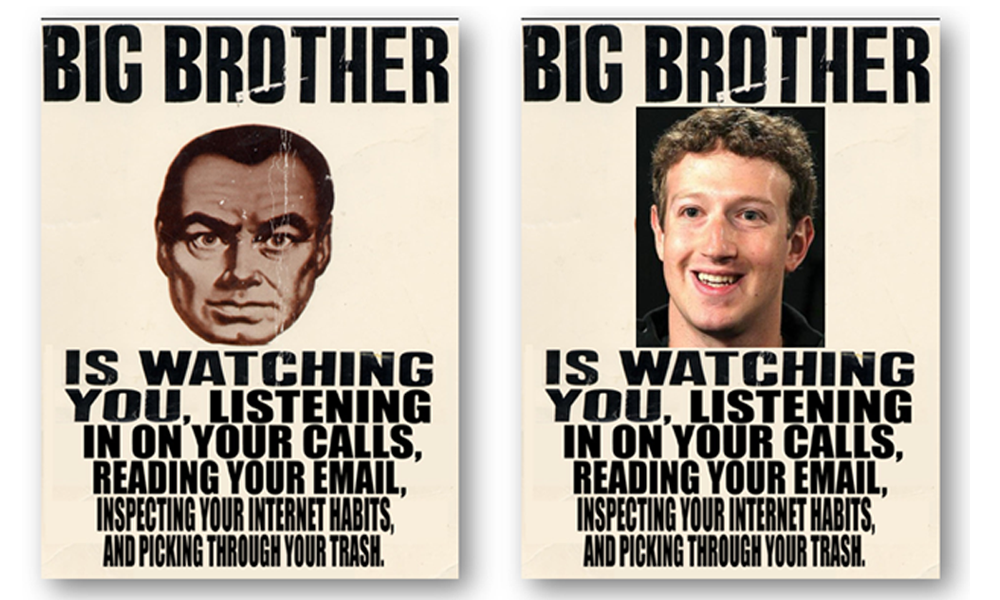 Whether you agree or not that Big Government’s and Big Tech’s “Big Brother” eavesdropping on your digital personality is good or bad, I think we can all agree that the newest face of Big Brother (cybercriminals) is certainly nefarious.

In the old days, one might equate this Big Brother eavesdropping to a “wiretap” that allows listening in on your personal telephone calls. Today, it is cybercriminals siphoning copies of your email to read and then, at the opportune time, insert themselves into the middle of a business transaction thereby tricking you (or your counterpart in the transaction) into sending money accidentally and unknowingly to the cybercriminal.

This Big Brother-esque digital eavesdropping by cybercriminals is the biggest trend today in cybercrime according to the FBI. It is responsible so far for $43 billion in stolen money with each attack garnering tens or hundreds of thousands of dollars a pop.

Without getting into the play-by-play details of how cybercriminals do this successfully, more often than one would like to think (read the how-it-works here), they often use an email protocol (IMAP) to replicate your emails invisibly to you. They have folks monitoring your email and, at the right time, they bring in the trickery.

The good news is, at RPost, we’ve developed a new element of our RMail email security service that we call “Email Eavesdropping Alerts”. It can tell YOU in real-time if those whom you are communicating with are sharing knowingly or unknowingly your email with others. It will even tell you if your email is being read in one of the cybercriminal hotbed regions of the world. 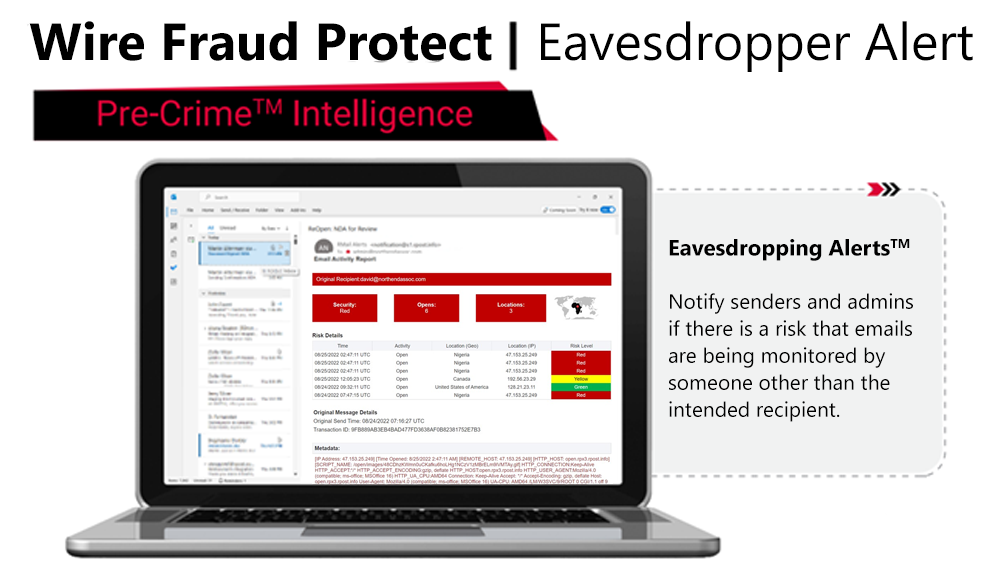 Most of us could never imagine OUR email account being compromised (eavesdropped on) because we are all such savvy techy folks 😉. But, what about those with whom you correspond?

This is the latest in email security — for every message you send, YOU now have real-time insights as to how secure or unsecure your RECIPIENT’S email account is. And YOU now can get early warnings after the cybercriminals have gotten their ear into your transaction at the RECIPIENT before the steal.

This new age in email security needs a new approach. We at RPost call it our “PRE-Crime” suite. In a nutshell, “Precrime” is a concept from Philip K. Dick’s 1956 sci-fi short story, “The Minority Report.” It is based on the name of a future police agency tasked with identifying people who will commit crimes in the very near future—before they actually happen.

RMail AI newly released features are essentially a customer’s very own PRE-Crime-fighting agency. With these features, (a) you will get alerts if an email to a client is being unknowingly read by a nefarious party. Put another way: if an email someone sends is being eavesdropped on due to an unknown security issue with the recipient’s email account, you will be alerted. And (b) you and they (if they use RMail), will both get alerts after they click SEND, before SENT that they are about to correspond with a cybercriminal unknowingly. 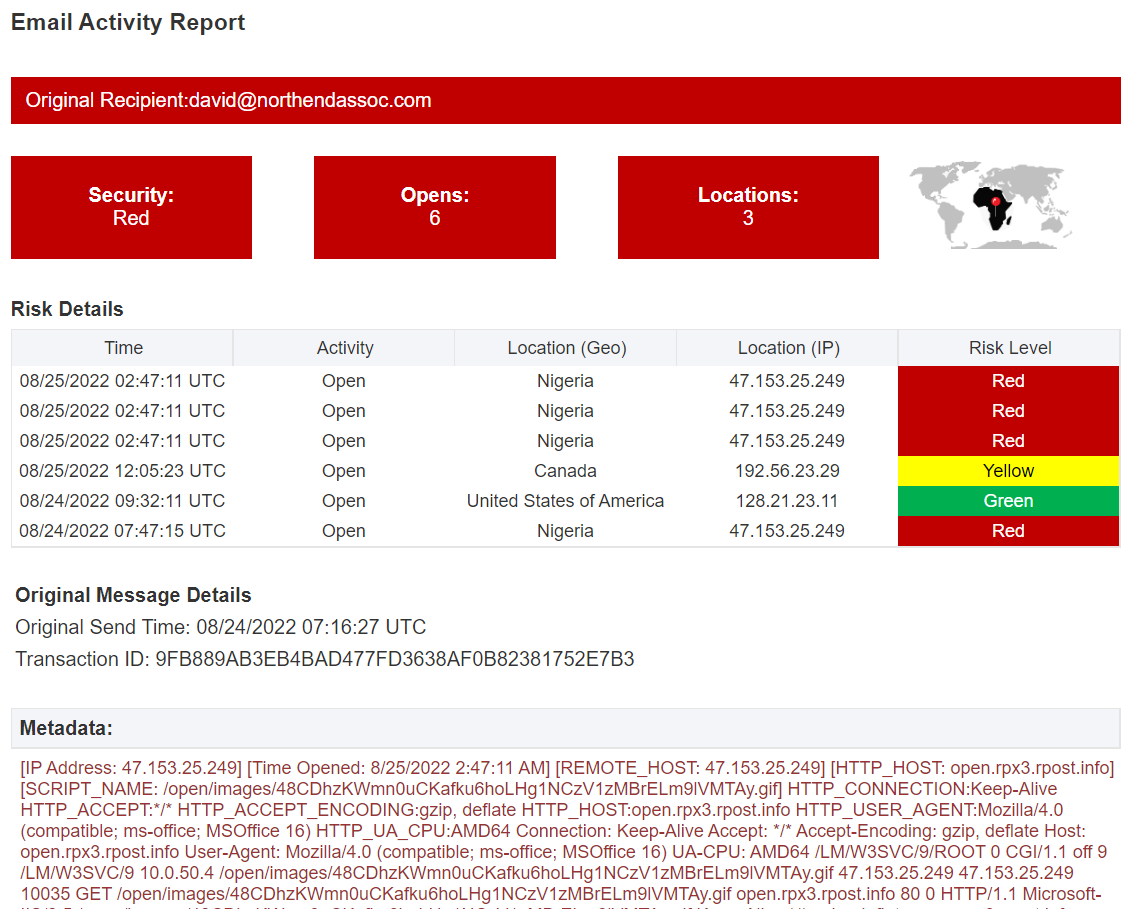 How to Prevent Cybercrimes Before They Potentially Happen